We use cookies and other tracking technologies to provide services in line with the preferences you reveal while browsing the Website to show personalize content and targeted ads, analyze site traffic, and understand where our audience is coming from in order to improve your browsing experience on our Website. By continuing to browse this Website, you consent to the use of these cookies. If you wish to object such processing, please read the instructions described in our Cookie Policy / Privacy Policy.
Interested in blogging for timesofindia.com? We will be happy to have you on board as a blogger, if you have the knack for writing. Just drop in a mail at [email protected] with a brief bio and we will get in touch with you.
Dr. Maj Gen (Retd) Anil Kumar Lal is a Defence Analyst who has authored many path-breaking concepts on Nuclear and Space Warfare strategies. He feels that the future Military Forces would be dictated by a new concept of Strategic detterence which would be a combined effect of Nuclear and Space detterence. He is a third generation Indian Army Officer, who has participated in the many India-Pakistan battles including the Kargil conflict, 1999. A captured ‘Defence Post’ has been named after him on the LOC. He has been Commanding General in the Siachen/Ladakh sector and had been Director Nuclear warfare in the Army Headquarters during the Pokhran-II test. He has held Fellowship at the IDSA and the Chair of Excellence twice at the USI of India. He has authored six books on National Security issues including a book on ‘Space warfare and Military Strategy.’ He had raised the Integrated Space Cell for India and pioneered the path-breaking document called the “Indian Space Defence Vision”. The author has also written the book:”Transformation of the Armed Forces: 2025”, which has already covered the methodology for a transformation with Indian characteristics. His last book: “Siachen Conflict Zone: Looking beyond the Himalayas” is covering contemporary issues including the present India-China standoff scenario. LESS … MORE
The Continental Landmass
The Eastern-Central-Western Himalayas Join the Karakoram (Tibet) and Hindukush (Afghanistan): Source-own sketching 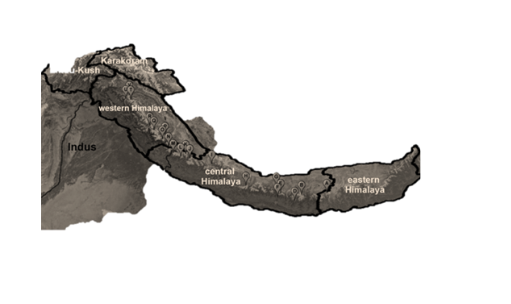 The Valley and Mountains like the Himalayas.
Thus the other domain in this region, which also needs deliberation is the continental landmass along which China is attempting to open new land routes and convert them into ‘Logistic Highways’ and thus nullify the ‘Malacca Dilemma’ or any other kind of naval blockade.
Out of the many land routes being developed by China, the Himalayan ‘China-Pakistan-Economic-Corridor’(CPEC) happens to be its ‘Crown Jewel’ project and that China till date has already spent 56 billion dollars (Almost 28 billion dollars of the proposed investment has been allocated for ‘early harvest’ projects — 18 billion dollars for power projects and 10 billion dollars for rail, road and port infrastructure — and the rest of the investment is expected to materialise by 2030 and beyond) in its construction/ up gradation. Thus the importance of the Himalayas and its two other extensions of the Karakoram in Tibet and the Hindu Kush in Afghanistan become geo-strategically important. Jaklut, in the ‘Pakistan Occupied Kashmir’ (POK) is where three inordinate mountain ranges of world make bond-Himalayas, Karakoram and Hindu Kush. This becomes relevant as the CPEC is passing through the ‘POK.’In addition the landmass comprising the unstable Afghanistan and Pakistan(Af-Pak) zone has already been called as the epicentre of world terrorism. The QUAD has already made a statement to address this area if required.